At the end of February, central Missouri was hit with two devastating snow storms that heavily impacted the electrical system for many electric cooperatives. For two days I traveled around with linemen working to restore power to Boone Electric Cooperative members in Boone County.


Read more about the storm in Rural Missouri's April issue:


Battling the weather elements was tough, but the biggest key during cold weather shooting is to keep your glass from fogging up. I always kept my gear in my car and avoided blasting the heat while in the car. Cameras can handle the cold temperatures, but batteries don't do as well, so after I was done shooting, I would take batteries out and keep them in my pockets. You will be amazed at how much longer you can get a battery to last by doing this.

While it was snowing I made sure to keep the moisture off as best as I could. I always keep 2 OP/Tech Rainsleeves in my bag. For 2, they only cost $6 and are a lifesaver if you come across unexpected precipitation. They won't keep off the rain in hurricane conditions, but for that price, you cannot avoid having a set in your camera bag or car.

I also tried to avoid changing lenses a lot to prevent dust on my sensor. So I had one camera with a wide lens and another with a mide range telephoto on it. 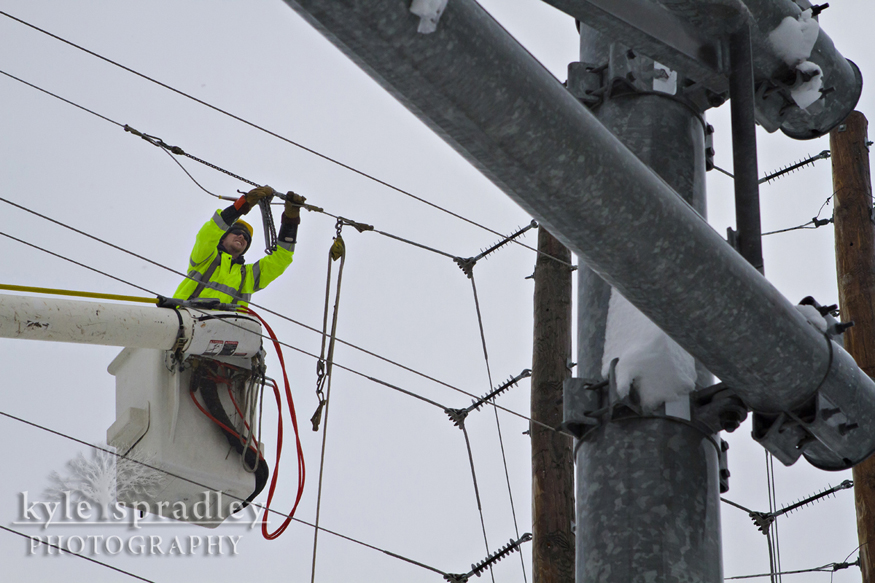 A Boone Electric Cooperative lineman repairs a section of line that had fallen over Highway 63, north of the Columbia exit off Interstate 70. 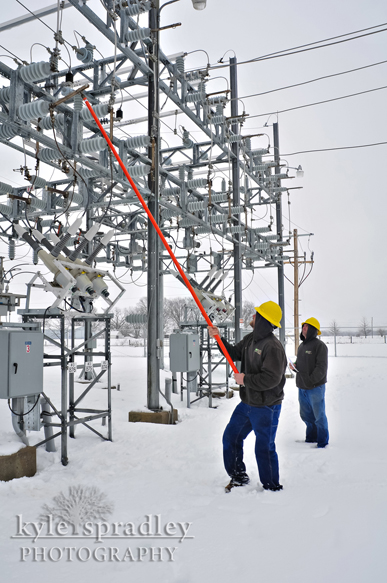 Boone Electric linemen Adam Bauer and Jeff Marren flip a breaker at a substation northeast of Columbia. Many substations went down across Boone County, leaving thousands without power. 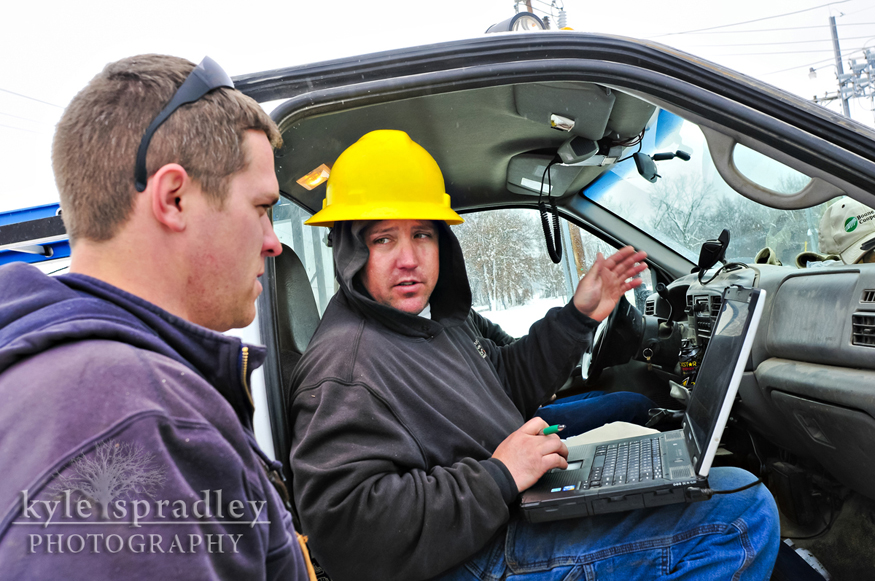 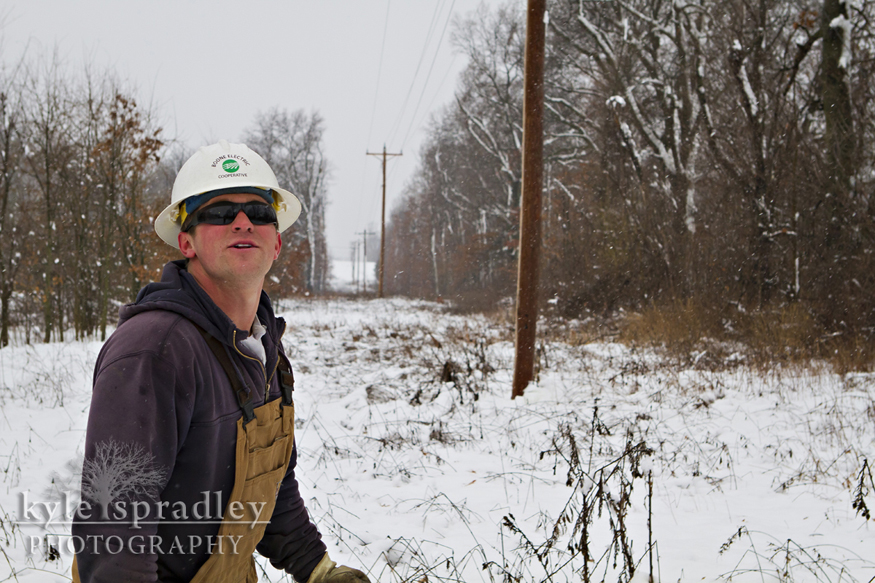 Matt Tiemann surveys the right of way for any downed limbs or power lines. Due to the heavy snows, most access roads were too covered for trucks to survey right of ways, so co-op employees walked several miles of line in search of damage. 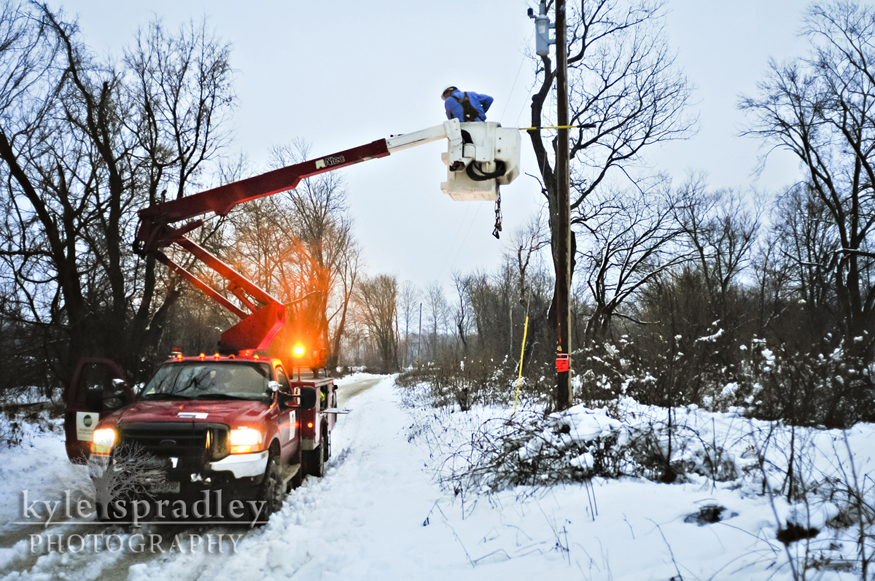 Intercounty Electric Cooperative employees came up to Columbia from southern Missouri to assist the Boone Electric linemen in Boone County. Alan Quick, in bucket, finishes repairing a stretch of line that had fallen due to the heavy, wet snow. 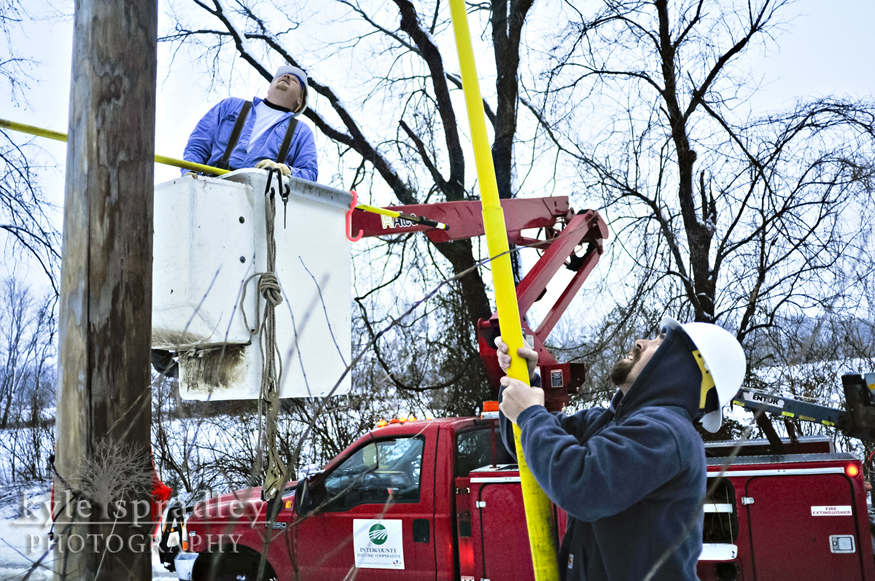 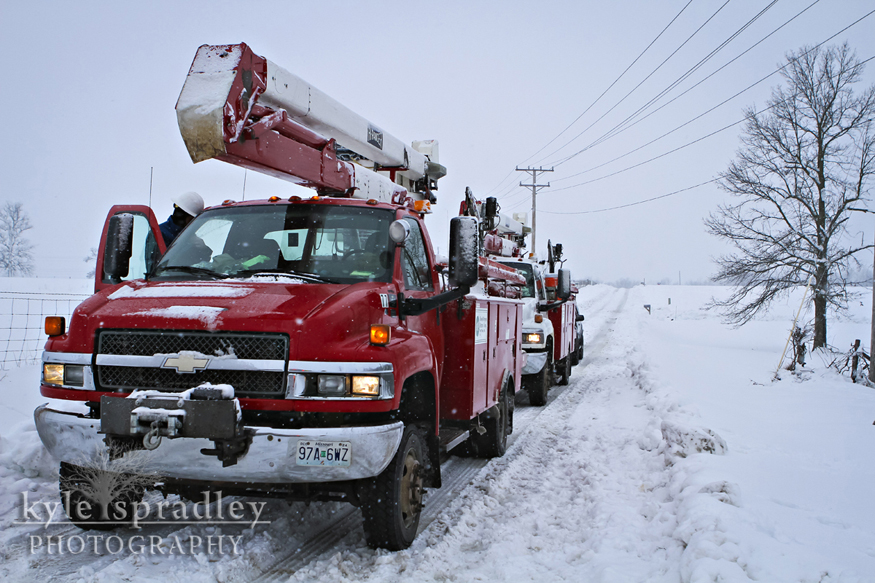 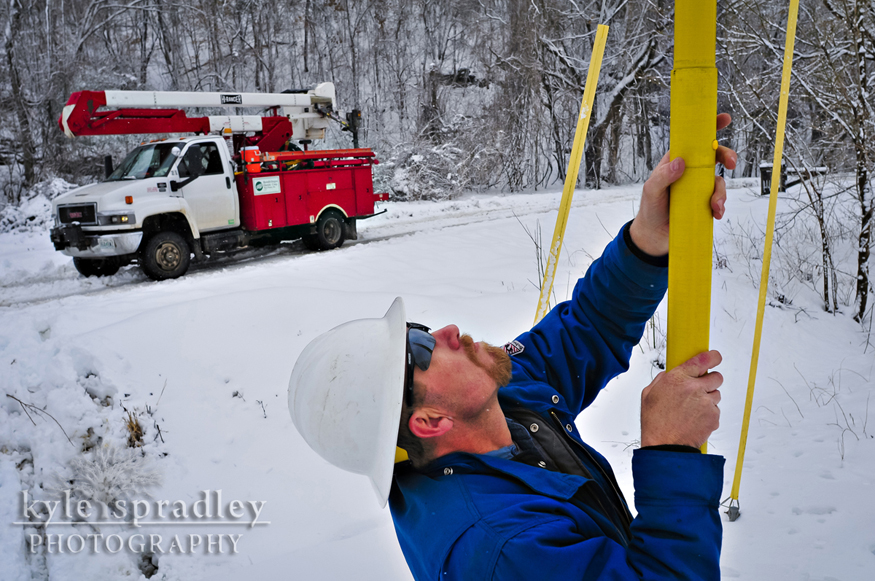 Howell Oregon Electric foreman Carl Givens flips a breaker on a transformer to restore power to the small community of Easley, along the Missouri River. 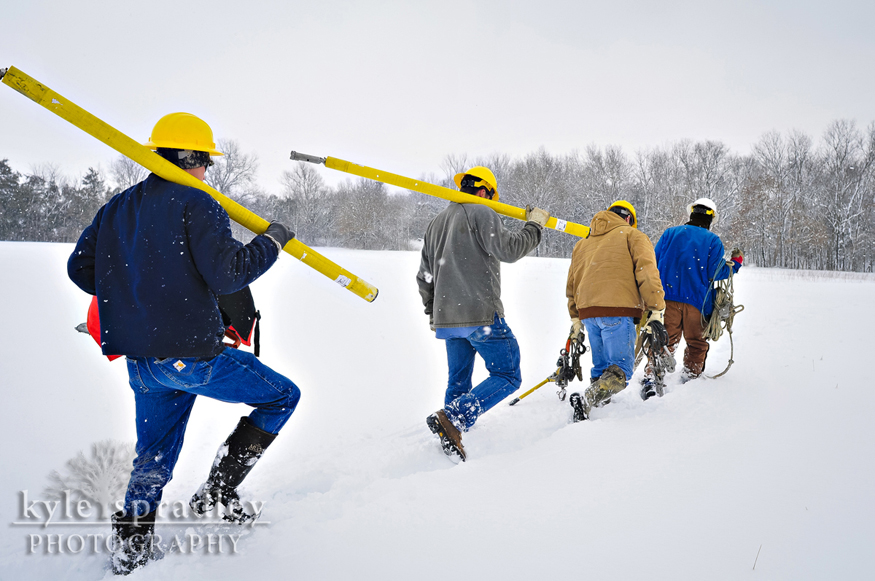 Linemen from Boone and Howell Oregon electric cooperatives carry gear and repair tools to a stretch of line that had fallen and snapped the top of a pole near Ashland. 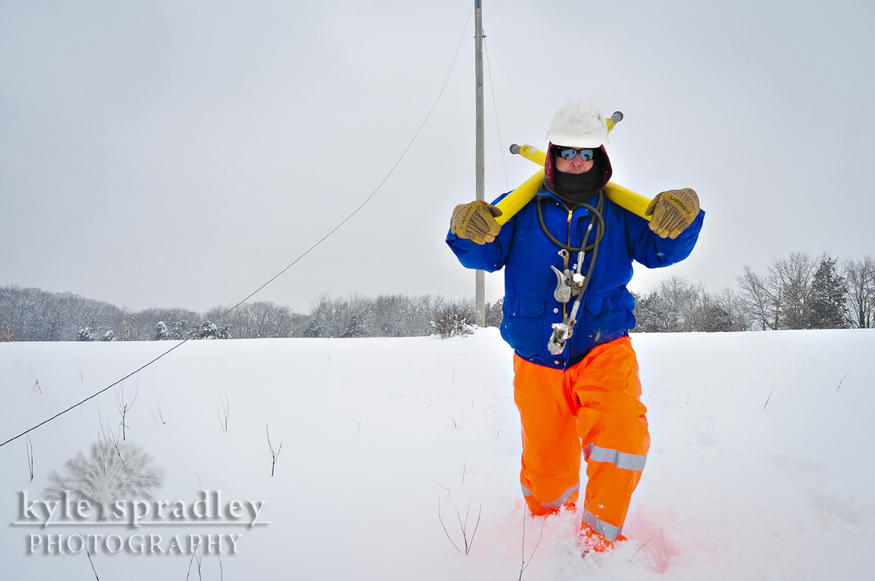 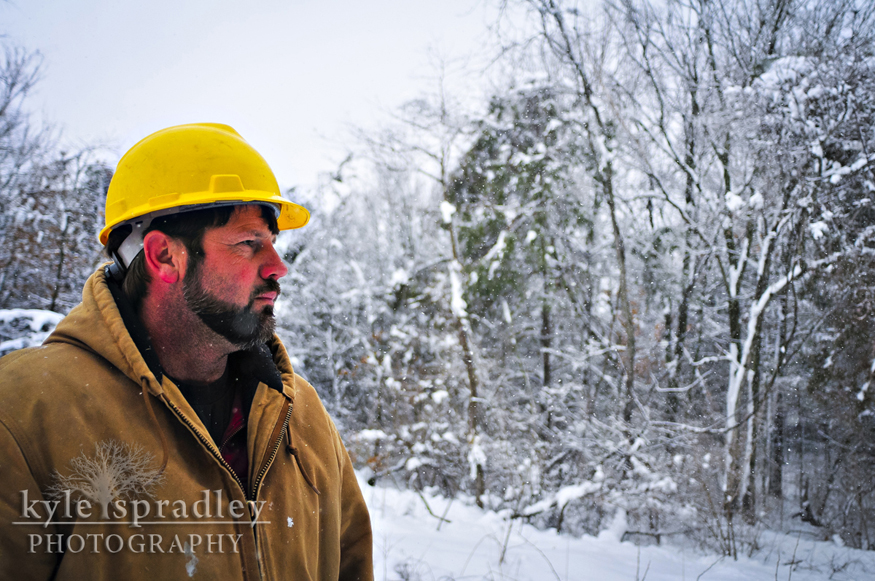 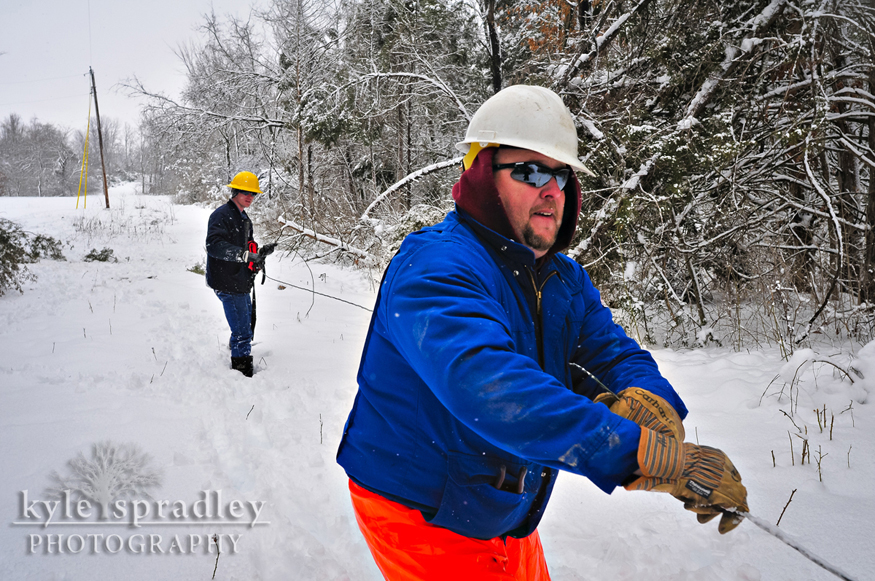 Mike Buehler and Rodney Rose of Howell Oregon Electric pull a stretch of line out of the deep snow. 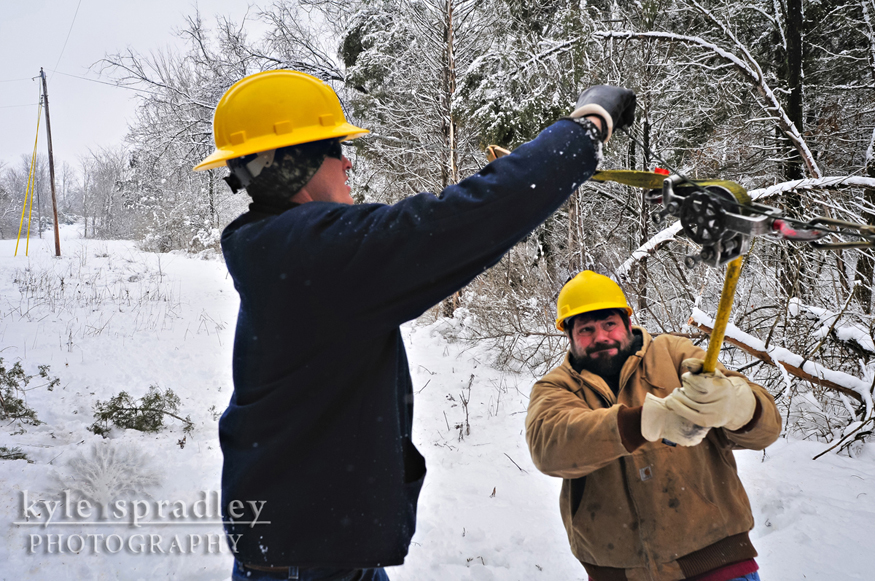 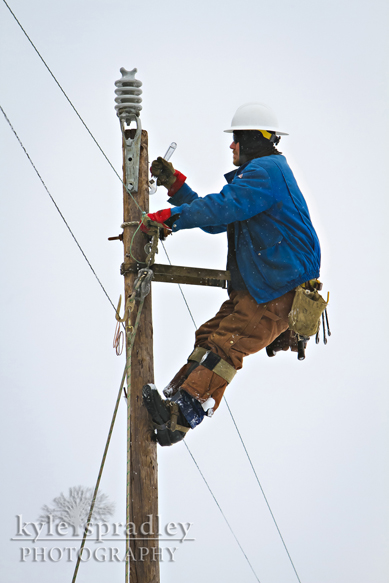 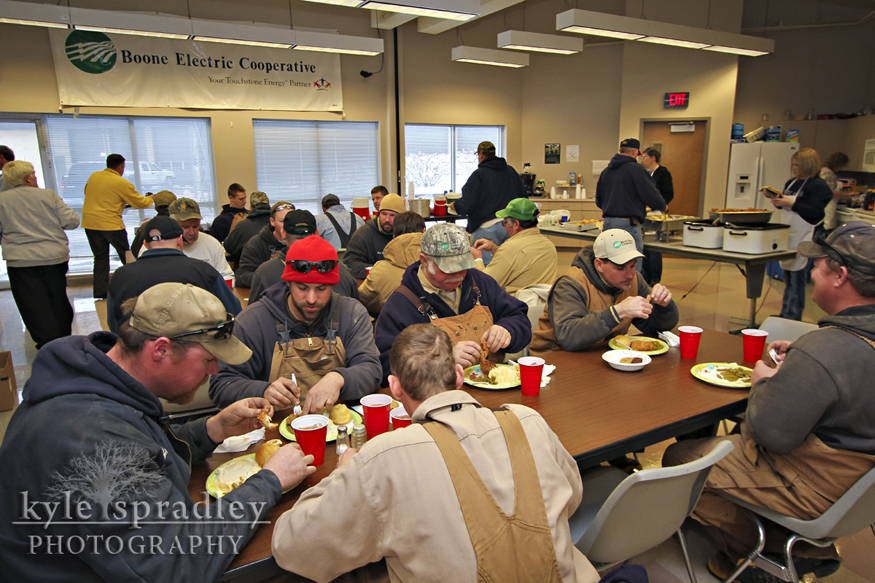 Back at Boone Electric Cooperative's offices in Columbia, the linemen were fed a meal of fried chicken and all the fixin's from members who donated the food to the co-op to thank them for their efforts in restoring the power. 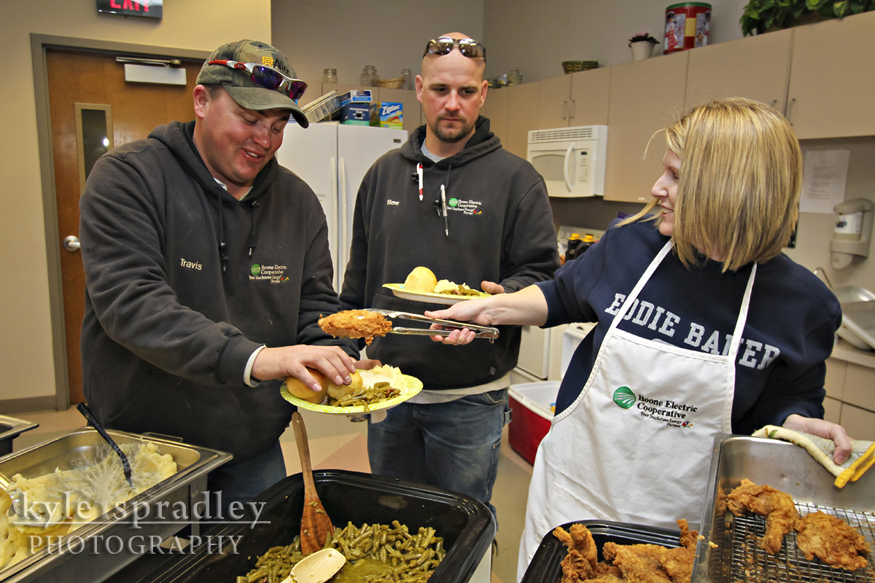 Boone Electric member Michele Spry, of Midway, serves fried chicken to Boone Electric linemen at the co-op's office in Columbia. Through Facebook, Michele was able to start a grassroots campaign to collect funds and food to donate to the linemen as a thank you for their efforts in restoring power to their communities.

For the March 2013 issue of Rural Missouri magazine I did a history piece on the All American Red Heads basketball team. The all-women's team was founded in 1936 in the small town of Cassville. From the Ozark town in southwest Missouri the team traveled to states all across the country playing strictly teams full of men — and they consistently won. For 50 years, the women played close to 200 games in a 7-month season.

Read more about the Red Heads in the March digital edition at:

I was lucky enough to find two former Red Heads that were still alive and able to visit with. Brenda Koester, who lives in Moberly, and her sister Kay Burk, met me at the Cairo High School gym for a portrait session. I set up one Nikon Speedlight with a Lastolite box diffuser on camera left and had another Speedlight firing towards the basket in the background. I fired the flashes via a Pocketwizard.

The ladies were great and still had a few tricks up their sleeves. Their story is truly a privilege tell. 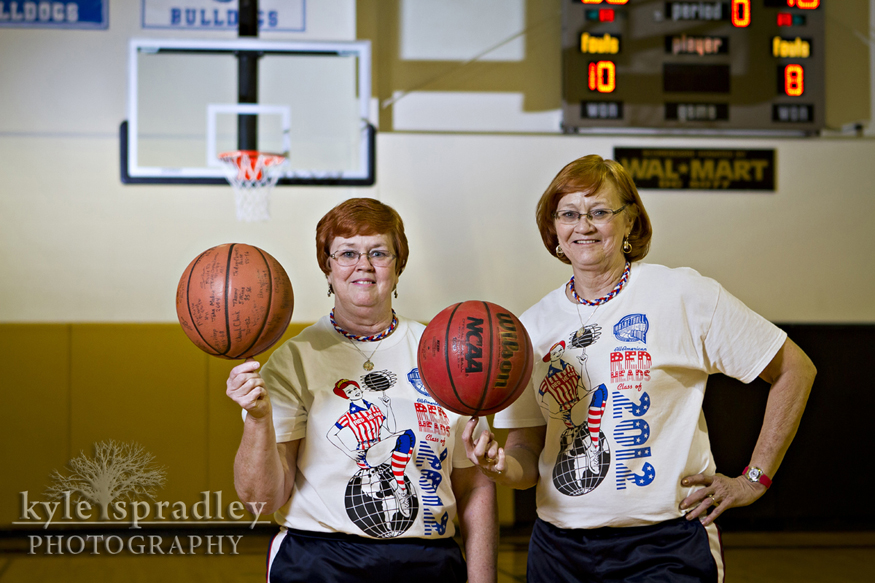 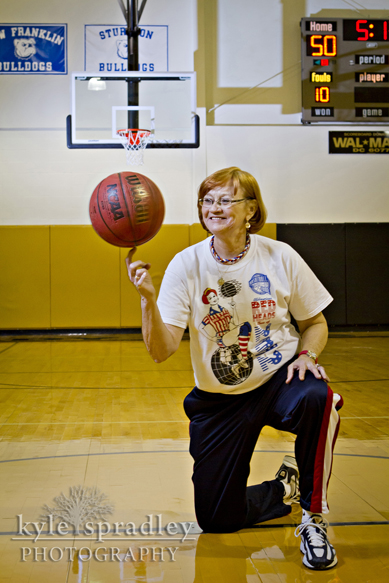 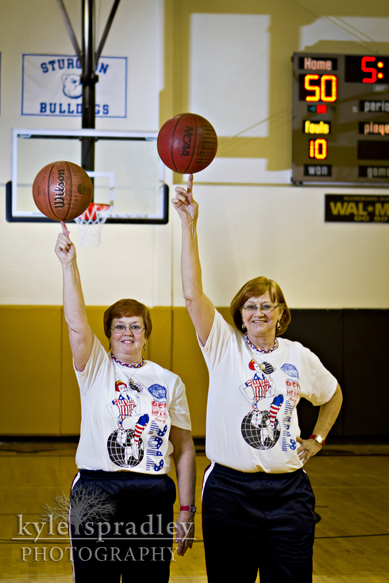 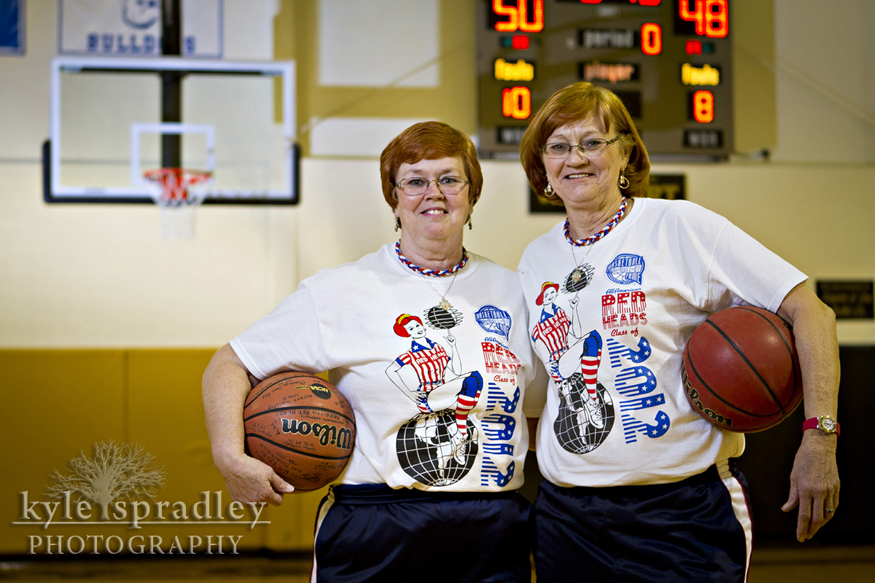 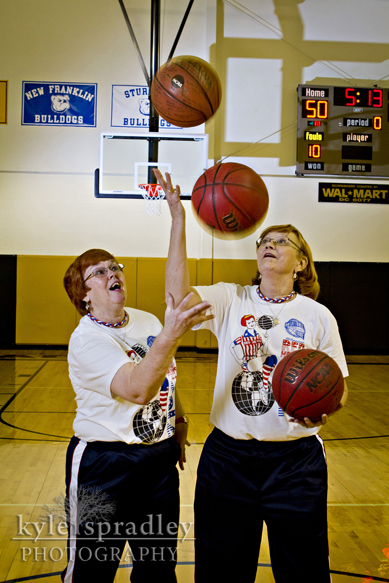