My story for the Missouri Photo Workshop.62
For forty years Hugh Dunn was the head high school football coach and the constant center of attention in Macon. Nearly 20 years after retiring, the 88-year-old World War II veteran is still a major figurehead in the community.

Even without a left hand and eye, the man known simply as “Coach”, attends almost every home Macon sports game, mows the playing fields and with the help of his wife are involved with many organizations supporting the town. 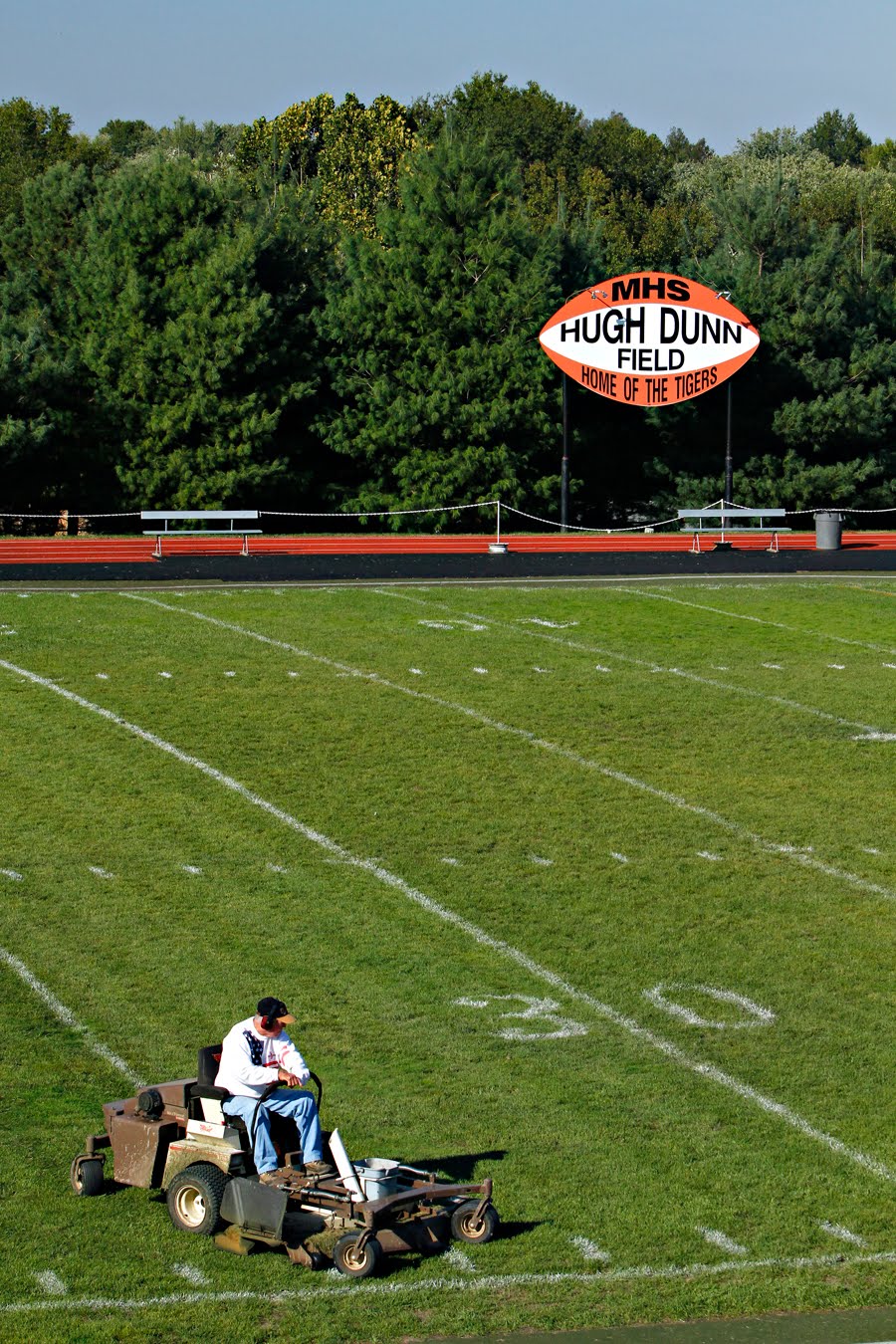 Hugh Dunn mows the Macon High School football field in preparation for a double header of middle school games the following evening. In 1971, the field was named after the illustrious coach in the middle of his four-decade tenure as head coach. Hugh says, humbly, “I still don’t know why they decided to name it after me. I thought they only name fields after dead guys and people who won titles.” 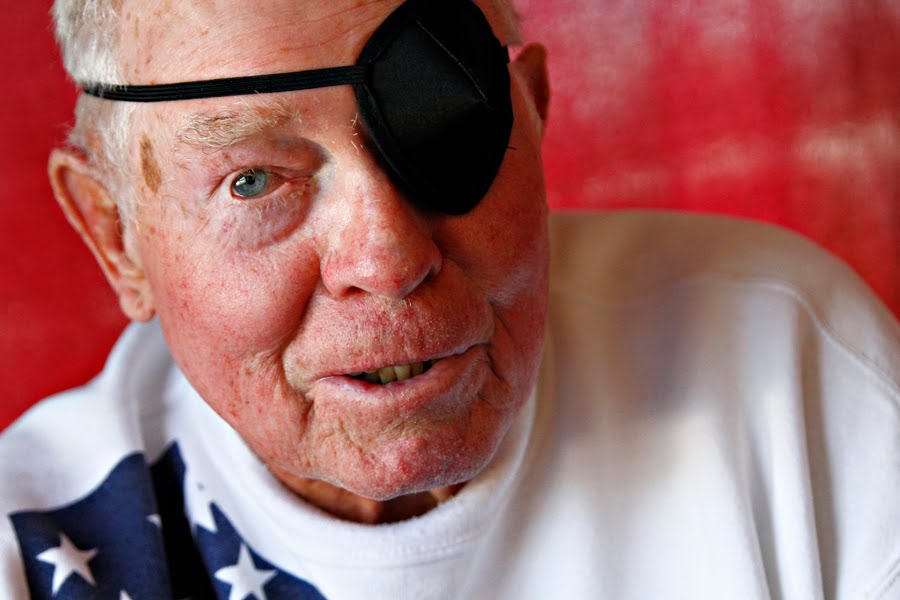 Hugh talks with friends at the Maple City Restaurant. No matter where Hugh goes in town, some former player or friend stops to greet and share a laugh with him.

Hugh’s left eye was injured during a childhood accident where he was hit in the eye with a small rock. Surgery attempted to treat the bruise the rock caused, but an infection lead to removal of the eye. 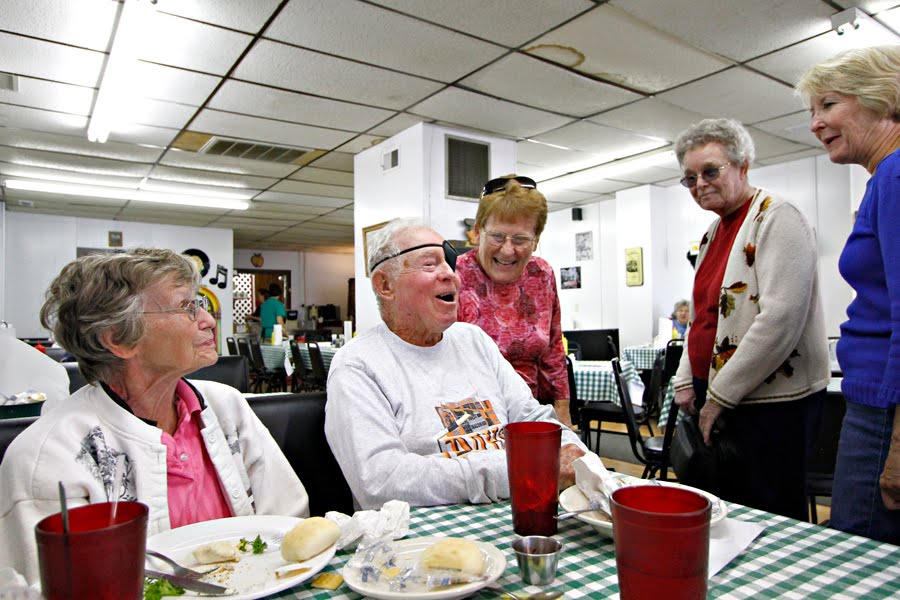 Hugh and Peg share a laugh with members from their church at the Apple Basket Café in downtown Macon. The ladies were excited to hear that Peg had been doing better after a medical incident that left her hospitalized. 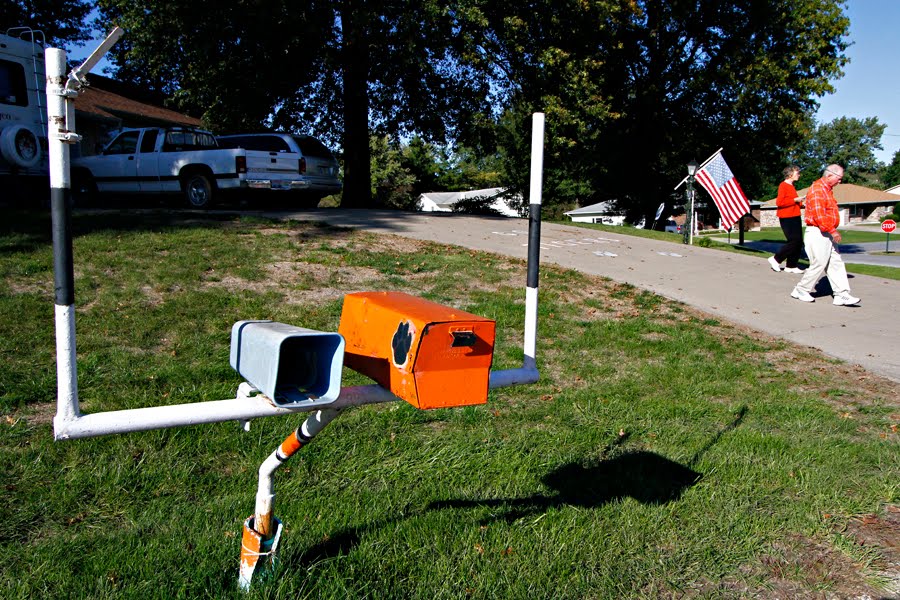 Hugh and his wife of over 60 years Peg, leave their home to walk to the high school to watch two softball and middle school football games. Since the Dunn’s home is across the street from the school, the couple hardly ever misses a home sporting event.

When local craftsman Ward Harrington built the new field goal posts for the school’s field, he felt Coach deserved a piece of the game also. 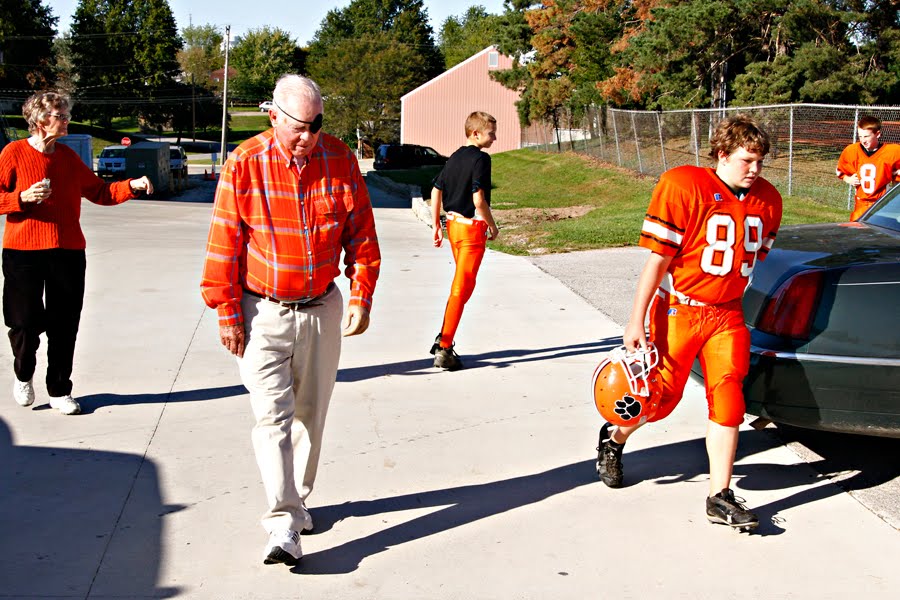 Players from the Macon Middle School football team head back to the locker room before the start of a game alongside Hugh and Peg Dunn. 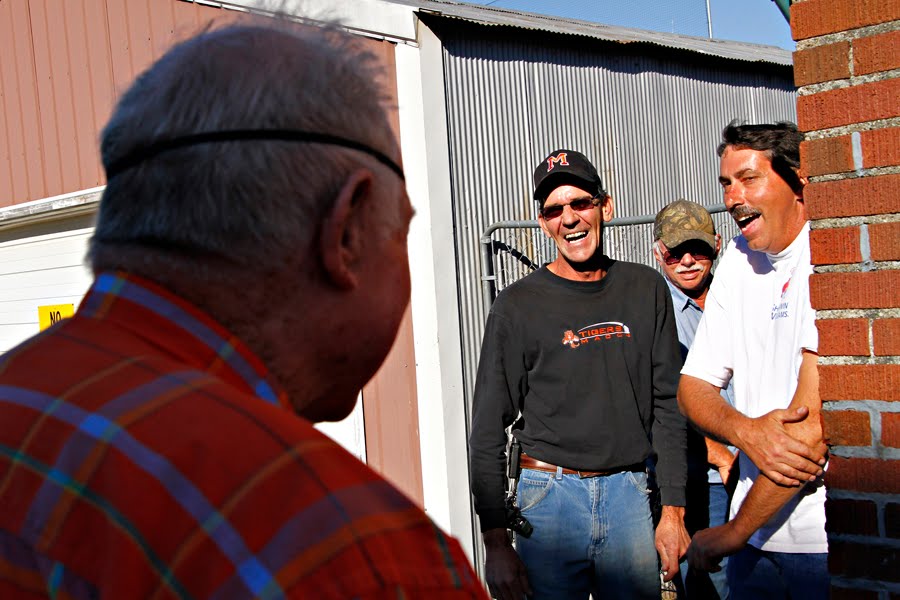 Hugh laughs with some of his former players and co-workers at the school’s maintenance shed. Although Hugh mows most of the grounds, he still credits the beauty of the campus to them. During a middle school football game, Hugh chats with Dick Hilgendorf in the press box above the stadium’s grandstands. Besides being a longtime coach, Hugh was an All American at Missouri Valley College; announcers and statisticians always appreciate his knowledge and color commentary of the game in the box. 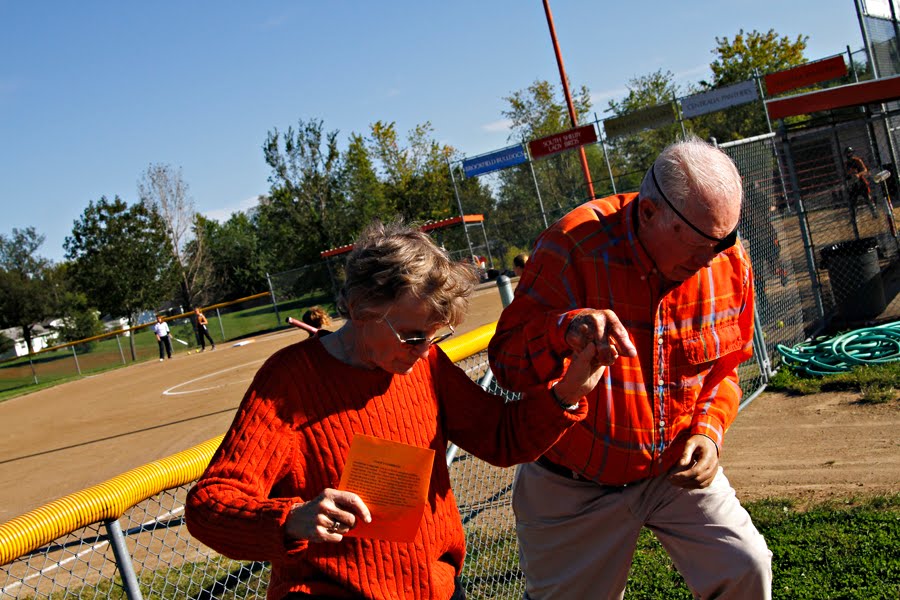 Hugh helps Peg up the bleachers before the start of a junior varsity softball game at Macon High School. Besides missing his left eye, Hugh also is without his left hand, but still goes out of his way to assist his wife.

Hugh lost the hand During World War II Hugh lost the hand when he was aiding to a wounded friend in a trench and a German mortar exploded in front of them. Hugh received the Silver Star award and two Purple Hearts for his heroics. 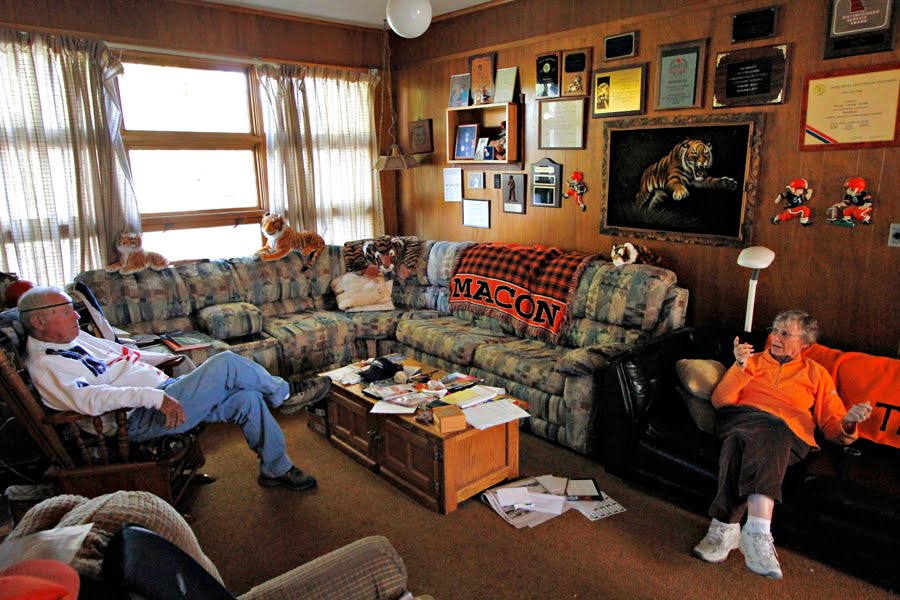 Amidst several sports trophies and awards, tiger memorabilia and Macon regalia, Hugh and Peg discuss a baseball game on T.V. The couple spends most evenings catching up on the daily sports scores and following their favorite teams. 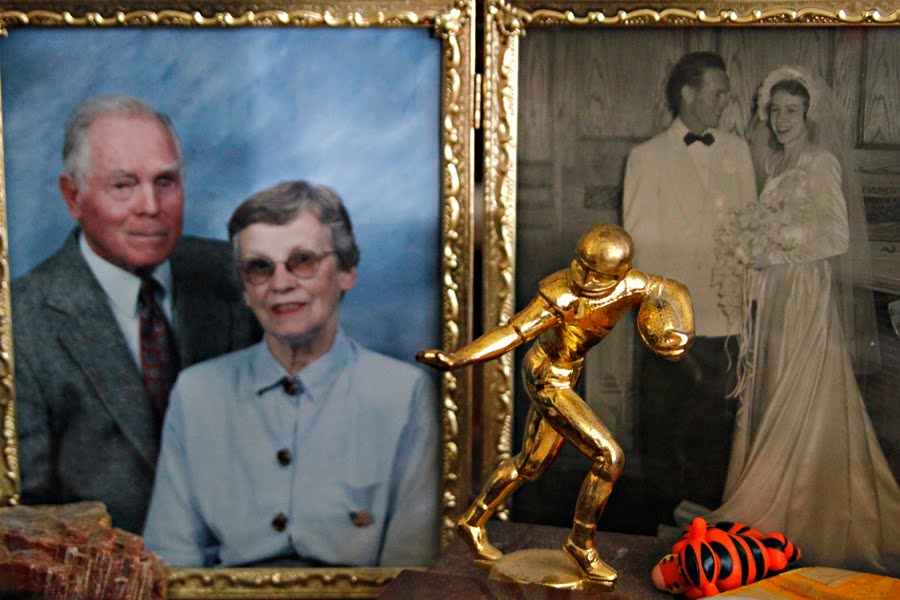 One of Hugh’s trophies sits in front of photos of the couple.

Hugh and Peg met while in college at Missouri Valley after he returned from service overseas in the U.S. Army during World War II. They are the storybook couple. Hugh was the standout football star and she was the homecoming queen. 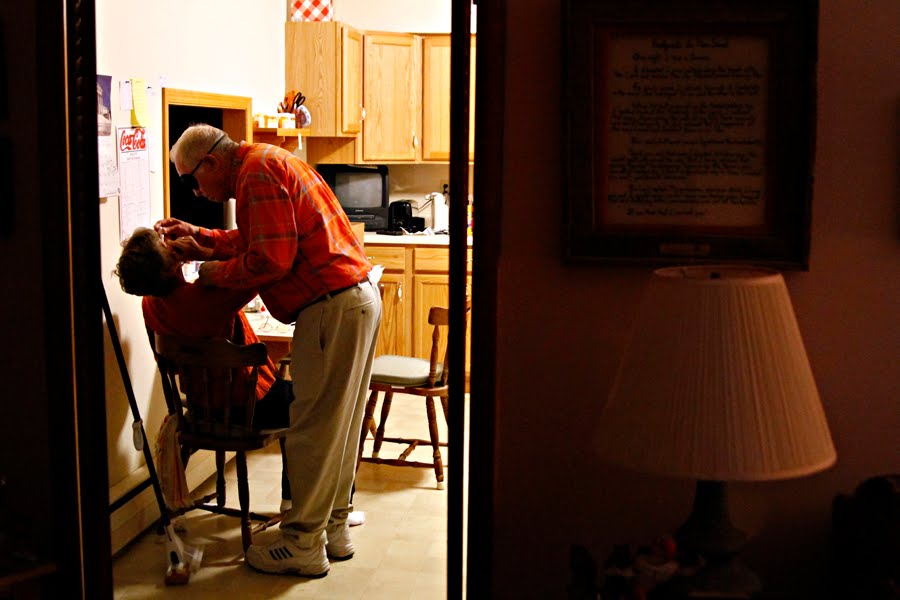 Hugh applies antibacterial drops into Peg’s eyes. Ironically, Peg also has been dealing with an eye infection from surgery. He is in constant watch over her, making sure she takes her medicine to control her high blood sugar and care for her eye as to not end up without it like Hugh.

“A coach is only as strong as their assistant,” says Hugh. “Without her, I wouldn’t be much. She humbles me.”
at 2:49 PM 0 comments